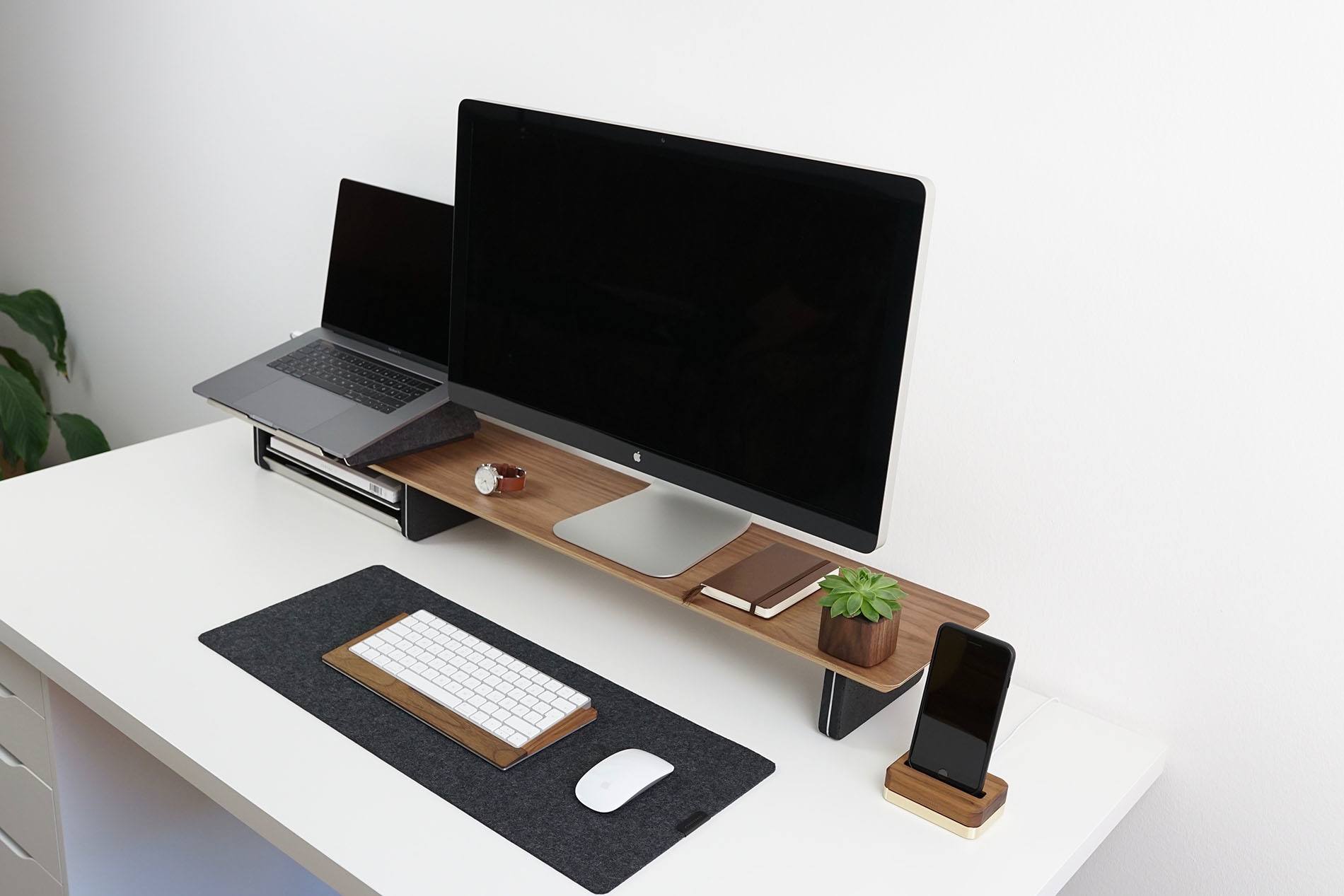 Lawyers Love Macs. And it’s Easier Than Ever to Switch.

Are Some Law Firms Stuck in the Technological Stone Ages?

In any profession, the number of people – and companies – choosing PCs over Mac are getting fewer and further between.   It is to the point that they are about as rare as the Bengal tiger, dinosaur bones, and Pogs.   Sure, PCs are better if you are a gamer—but last I checked, you were not getting paid to play Counterstrike. You are an attorney at law, and Macs are distinctly better for the purposes of the workplace.

Yet, for some reason, some law firms and even individual lawyers have a tough time – well – getting with the times. Since technology is not necessarily at the forefront of the industry, it is challenging for practices to stay on the cutting edge. Meaning, they are failing to implement the tools that will vastly streamline their operations.  So, these firms relegate their attorneys to remaining stuck in the past. They are hindered with the inferior PC technology that, frankly, slows them down and hampers their productivity.

I will assume that your firm has you stuck using a PC computer and you want more from your system, or you are an independent attorney weighing your options.  Either way, you are currently using a PC, but you are curious about Macs.  And let’s get serious, it’s 2020. So, you are well aware of the power, versatility, and convenience of the iPhone—since you likely own one. Furthermore, you have – at the bare minimum – dabbled with the iPad. In fact, I am willing to venture a guess that you own an Apple computer for personal use at home.

To make a long story short, the sheer seamlessness and streamlined capabilities of a Mac are not much of a mystery to you.

There is No Better Time Than the Present for Positive Change

I must ask: what has stopped you from making the shift from PC to Mac at your practice?  Because the only reason you are reading this is that your PC has driven you around the bend. There have been times – I’ll bet – when you have considered smashing the darn thing with a baseball bat.

Allow this article to act as the final tipping point that helps you make the leap from PC to Mac, once and for all.  Now, for the sake of dramatic effect, I have made some jokes at the expense of Windows. But I by no means hate the products—and this article will not descend into outright PC bashing.  However, I do wish to illustrate why your practice needs to adopt Apple computers and how it is easier than ever. I will also discuss which cross-compatible tools are integral to your day-to-day operations.

No, I Am Not a Mac Salesman

In the interest of full transparency, I am going to hit you with a defining truth about myself:

I am a Managed Service Provider that is predominantly worked with attorneys to help them extract the most value from their Macs.

Still, that does not mean I am some Mac shill who walks around worshipping the book of Jobs. Instead, I seek out clients who have already told me they are looking to take the plunge into using Apple computers and moving away from PC systems.

Painting the Complete Mac Picture for Your Practice

With the above section in mind, I will state explicitly that PC-using law firms and attorneys interested in Macs are my bread and butter.

They know full-well of the benefits that will come their way; it is just that they all share a distinct fear of the unknown.

If this sounds like you, there is a strong chance that you have also been deterred by the rumblings of outdated narratives surrounding Apple computers. Misguidedly, you believe that these devices would not fit in a law practice.

Now, if these thoughts are holding you back, I am going to provide you with a few statistics to consider:

The numbers keep rising for a good reason.

One of those reasons is that the Mac misconceptions – discussed below – are disproven every time Apple computers are successfully implemented into a law practice:

Mac Myth #1: Macs Cost Too Much

Yes, a $300 Chromebook is a more inexpensive upfront option than a standard Apple laptop or PC.

My first counterpoint is that you get what you pay for.

Furthermore, when comparing top-notch PCs that possess similar capabilities to a Mac, the prices do not diverge as much as you would assume.

Plus, unlike with Macs, you’ll end up paying a premium for PC maintenance. This factor will vastly increase the total cost of ownership of these devices.

Also, the resale value of Apple computers is drastically higher than that of PCs. To add some real-world proof, I sold my 6-year-old 27” iMac for $709 last year. That’s over 30% of what I had paid new. That’s just never going to happen with PC products.

We are in the 2020s now, meaning that this issue was nipped in the bud some time ago.

Mac Myth #3: “Shifting to Macs in Your Practice Can’t Be done” – Ill-informed IT Person

A shocking number of IT professionals are unable to support Apple with the same proficiency as they have with Windows devices.

They specialize in this avenue and do not have the same knowledge base with macOS, so it threatens their job security. Also, they might prescribe to the misguided notions about Macs, since their experience is limited with these systems.

The Cloud has advanced to the point that most software needed by your practice is accessible through that platform (e.g., Software-as-a-Service).

Even compared to half-a-decade ago, Law firms with Macs have significantly more options with software.

Did you know that IBM has studies showing that 5% of Mac users call help desk compared to 40% of users calling for their PC devices?

When I shifted to Mac from Compaq, while attending California Santa Barbara, I was blown away by the ease of use.

For instance, compare the printer connection process between the two systems. With Macs, it was a simple matter of plugging the printer to my laptop via USB. Conversely, when I used my PC, syncing the printer with the device felt like an act of rocket science. The result? I could spend time hitting the books and researching as opposed to struggling with technological snafus.

It is fair for you to poke and prod at me until you get the concrete answer of why your law firm transitioning from PC to Mac is so straightforward. Answer such a query requires me to delve into the pivotal platform that sent Apple soaring into the mainstream: The Cloud.

It was a technologically tectonic shift that saw most PC-exclusive software titles made available on the Cloud. On top of that, Microsoft committed to platform parity.

In other words, Bill Gates’ empire decided it wanted all operating systems to offer the same experience. The tech giant decided to pour a wealth of resources into their own Apple development team so that Microsoft Office apps could function proficiently on Macs. Unlike ten-or-so years ago, when cross-platform apps – frankly – stank to high heaven, today, Mac applications of PC software offer no such hurdles.

Which PC Software (That’s Integral to Attorneys) is Cross Compatible with the Cloud?

I’ll make a quick bulleted list of the essential Microsoft Software need by attorneys that are seamlessly compatible with the Cloud:

Note that there is a difference between Mac-native apps and Cloud-native apps and that my breakdown is not fully comprehensive. Whether you are looking for litigation support, document review, trial presentation, or even more, there is likely an adjacent Cloud-based offering.

If you are seeking a vaster list of options available to law firms using Apple computers, read Macs-in-Law: The Definitive Guide for the Mac-Curious, Windows-Using Attorney, published by the ABA Law Practice Division.

Section 4: Dealing with the Realities of Change

Your transition to Mac devices is going to come with something of a learning curve, and everybody will require some time to adjust. Without a plan in place to smoothly handle those realities, your transition will be as successful as Elvis’s movie career.

Be Weary of Legacy Products

Unfortunately, there are still legacy Windows-based applications that are no yet available on the Cloud. The best way to mitigate any nasty surprises in this vain is through performing your due diligence. Figure out whether your applications possess a Cloud-based version or Mac-Native alternative.

If these solutions do not exist, it is relatively headache-free to virtualize Windows on your Mac. Though I strongly suggest consulting with an experienced professional to help with these instances.

It’s Time to Take the Plunge

It’s time to shut out the naysaying and the lingering doubts that are holding you back from making the Mac switch. This article should go a long way in encouraging you to turn your law firm into an Apple-laden euphoria that runs efficiently and effectively.

Are you ready to turn your Mac curiosity into something tangible that will act as a genuine game-changer for your practice? Then contact me today for a consultation, so we can discuss a smooth, easy transition.

Tom Lambotte is CEO of GlobalMacIT, the only company in the world that specializes in providing IT support to Mac-based law firms. His methods are based on close to a decade of research, testing and real-world refinement of Best Practices, working directly with Mac-based law firms and firms switching from PC to Mac, across the country and around the world. Tom is the author of Hassle Free Mac IT Support for Law Firms and a highly sought after speaker at national events such as the ABA Techshow and MILOfest, a Mac Lovin’ Lawyers Event. Learn more about Tom and GlobalMac IT at www.globalmacit.com.

I am opening a solo office inn May and decided to go all Mac. My old firm probably needs help since they lost their apple iT guy over a gross receipts tax squable. I think I can handle most of the transition. I have a new iMac, MacBook Pro and Ipad Pro. I figured out how to network an older HP 4015 laser and installed the duplex option. The biggest issue to me is I am pretty much an old PC guy and I don’t know anything better than selecting automatic updates for Mac. I am using Sharefile, beginning to use Clio, Microsoft Office 365 Business, Fax.Plus, BitDefender, GotoMeeting (too late I already paid for a year) and Quickbooks desktop. Not sure what it costs to get you involved. I am getting a DSL line at 20 mps that they say is fast enough so no VOIP just a second line on a simple two line set of phones. No assistant yet except my daughter.

I have a baby website thielnm.com, that is a work in progress. 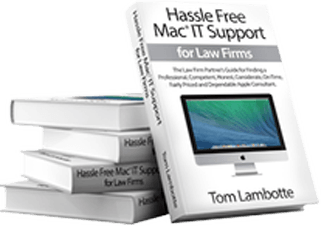 Request Your FREE Copy to Learn the must know details about finding the right Apple consultant.